So the much awaited series about the Famous Kublai Khan is a few months away. I know it seems forever but it gives you all time to watch the first 10 episodes all over again :P.  I loved season 1 , the way in which the Mongolians would live and rule . How they would fight ; My God hundred eyes what an absolute beast for someone who cant see.

The series is historical , extremely exciting with explosive battle scenes and this is not just normal fighting this is like major Martial Arts Warrior kind of fighting with long braided hair swordsmen    *hmmm ❤ *

For those who haven’t watched let me give an insight :

Basically it is inspired by Marco Polo’s early years in the court of Kublai Khan, the Khagan of the Mongolian Empire and the founder of the Yuan Dynasty (1271 – 1368), in Khan Baliq (today Beijing ).

A young and handsome Marco Polo (Lorenzo Richelmy) is making his journey across a burning desert battlefield as the destination is the Silk Road ; sole trade route connecting to the West . The journey is accompanied  by his father , uncle and other traders but this abruptly comes to a halt when Kublai’s soldiers attack them sparing only the 3 Europeans who have to face Kublai the great at his court.

The Polos to their surprise are not treated as prisoners, they’re actually quite looked after. Kublai khan has one request and that is that they go back and return with a priest ; you see in that day and age a priest was very learned and educated and that fascinated him. However when they return without one they are banished from the land forever. A quick decision made by Marco’s father ; in return for trade through the silk route Marco is to stay at the palace as Kublai’s servant .

I don’t want to give any spoilers but throughout the series you will see how Marco learns and adapts to the customs of the Mongol’s and they also learn through him . The epic battle scenes , the invasions and the “harems” 😛 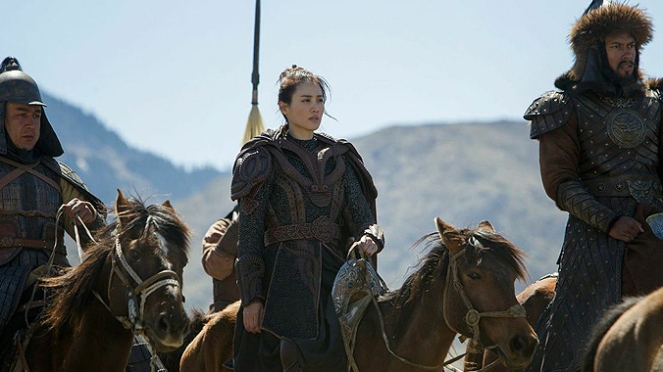 My fav character would have to be Jingim the Khan’s lawful son and heir. How he struggles with his role as Prince , wanting approval of his father constantly striving to live up to all expectations required as a royal. Also his mother’s continuous pressure to produce an heir coaxing him to find another bride (Blue Princess) , when he already has a wife or .. several wives 😛 !

Just look at his hair ! *Cutie*

Do watch and tell me what you think !