As you all know by now, I am a sucker for history and so this Drama is really worth watching !

It’s 1837 , Young Alexandrina Victoria’s governess is anxiously awaiting the arrival of a letter that is to be delivered by a soldier, who specifically is to be wearing a black band around his arm . Phew that was a long sentence . Well-  that soldier certainly does arrive;the governess is first to inform Alexandrina that she is to become the next queen of England as her uncle , The king has passed away.

She’s so young and all of a sudden there’s this newfound power that is turning out to be a burden on her petite shoulders (Yes she was known to be very small around 4ft 9 or 10 bless the babe). She most definitely can be perceived as naive  – especially when she’s had a bit to much champers  (tipsyyy) ..

However, that’s not entirely true. Yes Victoria has a tremendous deal more to learn ; be educated in how to run a country but she has Lord Melbourne ( Ridiculously handsome Rufus Sewell ) . I can totally understand why everyone voted him for Prime Minister 😛

For quite some time only Lord M believes that Victoria can be a great Queen and he encourages her  .. He radiates soo much positivity and hope   ( They look soo cute together – even though she’s like only 18 and hes supposed to be 40 years older).

The first episode depicts how confused Victoria really is this is revealed when introducing herself to all the nobility, ministers and men of importance she fails to recognise or even know their names – However , Lord M comes to her rescue once more. Victoria does have a way of cloaking the fact that she is lacking the full training that it takes to rule a country. This is by displaying to all that she can deal with whatever comes her way. There is a great confidence in her.

Most of you know how this story unfolds . But for those who do not I mustn’t give much away . Do enjoy the gifs tho 😛

You must see it for yourself.

Ohh and check this out

The performance by Jenna Coleman is superb. She really is a fantastic queen. Vicks certainly knows how to order people about that’s for sure but there is soo much kindness that overpowers this. The way Jenna depicts the young queens struggle to prove to the country she is fit for the throne is brilliant . Victoria is feeling the strain all at once yet she keeps her emotions hidden, her facial expressions are intact and for Jenna to portray that to us- I mean for us to observe exactly what she senses that doubt, uncertainty that’s shielded by her bold and confident appearance …  it’s all just WOW and I’m really really glad they picked her out for this role ! She is sheer talent ❤ 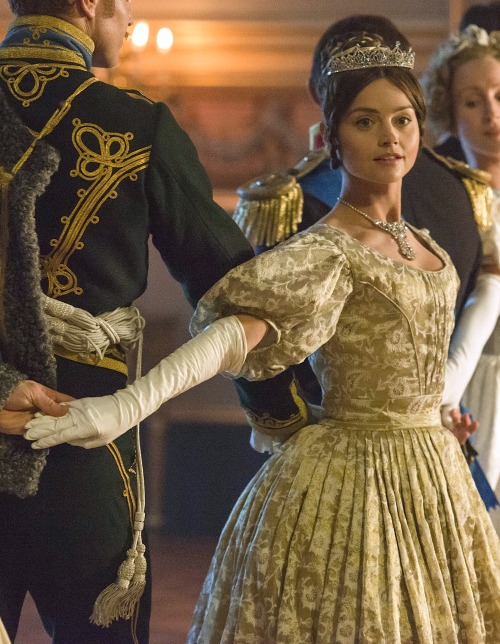 “They all think because I’m small that I’m still a child.
They’ve always underestimated me. They expect me to fail “.