Right so , you all must have heard of King Henry VIII ? The man with the six wives? Yep that’s him .

Well Today I wanted to explain a little about the “Love affair” between him and the beautiful Anne Boleyn.

Now I have been obsessed with Henry since longer than I can remember ( about 15 years to or more ..) I adore the history regarding the Tudors. How he rose to power, with a single nod he could behead one and  be betrothed to another.

I’ll delve more into his marriages in later posts but for now lets talk about the love that changed a course in history one that defied the church and not even the strongest of faiths could hold him back. It was . ” A Historic Love”

Anne was the daughter of Thomas Boleyn , 1st Earl of Wiltshire , and his wife, Lady Elizabeth Howard. Most of her education was in the Netherlands and France – she was also a maid of honour to Claude of France . Before that at around about 1514 she was also lady in waiting to Henry’s sister Margaret ( but she was way too small for him to fancy her then).

She returned to England in early 1522, to marry her Irish cousin James Butler. Apparently there was this dispute over family lands so Henry VIII decided and passed on his message of a union between Anne and James (Little did he know he would fall madly in love later on). Well that marriage never took place as Cardinal Wolsey broke up the plan for them to wed and instead secured her a place as maid of honour to Katherine of Aragon (Henry’s wife at that time) .

By 1523 she was betrothed to Lord Henry Percy whom apparently she was in love with. Henry always got what he wanted, and he wanted Anne. Her engagement  was cut short by Cardinal Thomas Wolsey yet again!

Anne’s striking looks and sophisticated manners earned her many admirers at court yet she refused several advances from the king. I loved that about her – what a diva! Henry was bent upon getting Anne, sending her atleast 17 love letters full of traditional courtly love imagery, calling himself Anne’s servant ( wit woo , Henry send me a love letter please) . He asked her to become his mistress – she yet again refused . ( well done Anne)

Henry knew Anne would only become his if he married her and hence the long and hard path was set to declare his marriage null and void (declaration of nullity) with Katherine.

When it became clear that  Pope Clement would not annul the marriage, the breaking of the power of the Catholic Church began. Hence his love for Anne brought about the reformation and  He passed the Act of Supremacy, declaring that he was the head of the English church. In June 1533 Anne was crowned Queen of England.

(Bit of extra information – Henry and Anne married on 25 January 1533, after a secret marriage on 14 November 1532 apparently she was already expecting the little one)

Queen Elizabeth I was Anne’s only daughter with Henry – she grew up to be one of the most powerful Queen’s we have ever known !

Now, Henry wanted a son, and Anne failed to give him one. After several miscarriages (one being a son) he became convinced the marriage was cursed. He was also a little insecure and worried she had a wandering eye . Shortly after, Anne was accused of adultery and witchcraft. She was convicted and imprisoned in the Tower of London.

On 19th May Anne was led from her quarters to Tower Green where, spared the axe, she was granted the ‘mercy’ of beheading by a French swordsman. She was known to have a swan like neck which made it even more ironic. Anne was the first English queen to be publicly executed. Rather than deny her guilt, she used her final moments to deliver a speech praising King Henry VIII, stating that,

“a more merciful prince was there never: and to me he was ever a good, a gentle and sovereign lord.”

I wonder what could have been had they still remained married. Oh Henry why did you have to go and do that? Anyways his daughters legacy lives on as does his. He was one of the founders of the Royal Navy, Whether Catholic or Protestant, it’s pretty great that he allowed the Bible to be translated into English. Also  he recognized his daughters as heirs which goes to show he did respect women’s rights and believed they could become Queens which his daughter did prove, very well ! 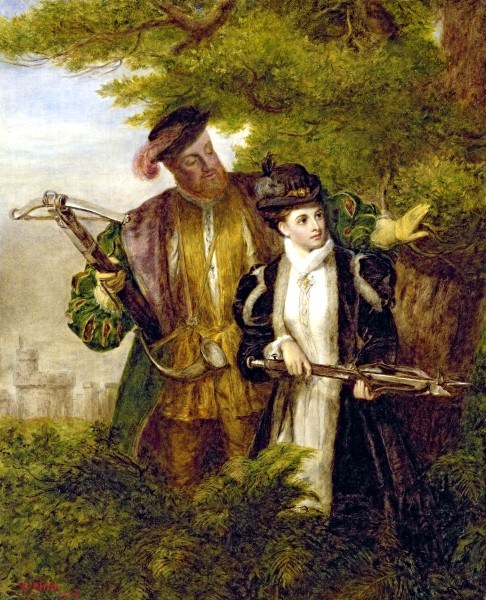 Below is one of my favourite tunes of all time (It’s never left my playlist and shall always remain)  Here’s to a love that changed the course of history .