Isnt it a beautiful thought that these men left a part of their ideas that will last centuries, all that visit will see a creation that was once in another’s mind, brought into existence. Ok I know I’m becoming all ” lets dream” mode but its true 😛

Suys studied in Paris,  under the tutelage of Charles Percier ( well-known architect). He won the Prix de Rome in 1812. Whilst staying in Rome he became a protégé of King William I of the Netherlands.

In 1817 he settled in Amsterdam & worked as an architect for the Dutch Crown. 1825 onwards, Suys had been given the opportunity to create beautiful buildings for Royals in Brussels. His projects in Brussels were more severely Neo-Classical in character. Creations such as Botanical Garden of Brussels & the Royal Palace.

Moving on to Balat, who was born in Gochenée 1818 . He studied at the Academie of Namur and secured a degree in architecture from the Academy of Antwerp in 1838. He was soon discovered by the Walloon nobility for which he built or renovated a number of castles. Balat’s work comprised of some renaissance ( this is more art and icons that are displayed, many sculptures along with paintings from artists & architects such as  Leonardo da Vinci, Michelangelo and Raphael. Theres a touch of neoclassical ( this is architecture produced by the neoclassical movement that began in the mid-18th century. It’s a structure that outgrows the baroque style with a more Roman and Greek feel – you will see buildings with a lot of pillars).

In 1846 Balat settled in Brussels. His was introduced to the Belgian royal family after he was noticed for his design of a temporary festive decoration for the Salle de la Madeleine (Magdalenamarkt) where the royal family had been present (1848).

One of his projects which are well reknowned is the Royal Greenhouse of Laeken. 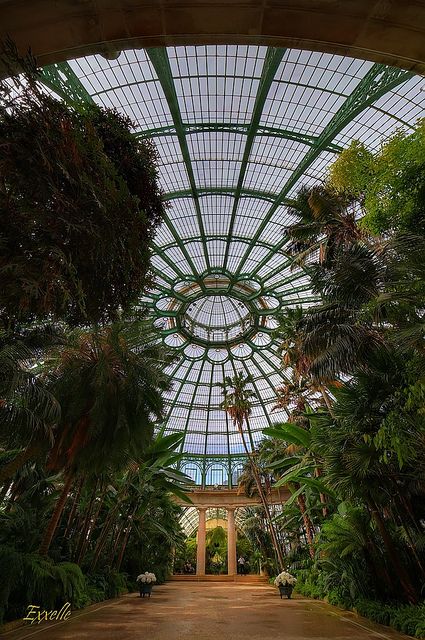 It consists of a huge complex of several dome-shaped buildings in iron and glass that are connected by glass-roofed galleries. The centerpiece is the domed ‘Grand Jardin d’hiver’ which is a circular interpretation of the Palm House of the Royal Botanic Gardens, Kew. Working with new materials like iron and glass, Balat was obliged to abandon his ‘classical’ stance. This stimulated the imagination of the architect. In the steel constructions he introduced decorative motifs derived from plants and flowers. This formed a first step towards Art Nouveau architecture that was further developed by Victor Horta who served as an apprentice of Balat.

Thankyou Tilman-François Suys & Alphonse Balat – you stepped out of the baroque style and brought a new innovative version of Greek & Roman architecture ❤ .