Recently I sat down , made some time and thought I need to watch a movie. So it wasn’t a Chinese or German movie this time round but instead I went for this film based on those war veterans/soldiers who were deployed in Iraq and how they came to terms with adjusting to normal life once more.

Now for one who has watched this movie you can understand how traumatic it truly is for the soldiers to return home. Suddenly there’s no violence, no bombs detonating or rapid shooting. In turn suffering from anxiety, tremors along with nightmares.

The main characters are: 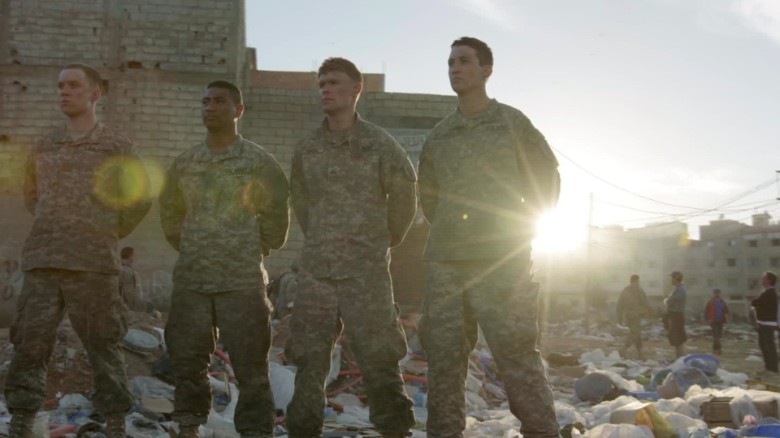 Near the very beginning its been a distressing 15 months in Iraq. Adam suffers from PTSD (Post-traumatic stress disorder). His wife pleads with him to get some help but when he goes to the department of veterans they have an immensely long waiting list. Billy is welcomed to an empty home with no fiancé or child. He’s desperate to get in touch with her. It’s harrowing watching him sleep on the floor that night all alone.

In complete despair and hopelessness, Billy goes to his fiancé’s work and commits suicide. It was a horrific scene and one that was so raw!

I assumed Tausolo Aieti,  was the most sensible, coping quite well. Thats until you see a scene where he is transported ( in his mind) back to Iraq and literally sees visions of himself shooting people down.

Inevitably experiencing brain damage which was caused by many bombs that went off one wonders how he survived. A particular scene that had me absolutely transfixed was when he is playing a game on the Playstation, a violent shooting game. At once its as though his sane mind has switched off and he goes ballistic, looking right through his wife  believing she’s the enemy. The sheer force of his punches through the wall display how horrified ones partner must have felt if they endured this when their husbands returned.

Desperate to make more money to obtain ecstasy ( in aiding with forgetting his memories for a small amount of time) he falls in with a group of drug dealers.

Adam manages to find a place at a rehabilitation center specializing in the treatment of PTSD. However, sensing his friend needs it more than him, he puts solo on that bus hoping one day he will return a more saner man.

Now im going to be honest, the movie was not amazing but there were scenes where you do stop and reflect. Its haunting what these soldiers witness and endure. So there’s not much action but its more of an emotional thing. Once again it’s not as amazing as say saving private Ryan or band of brothers.

It’s true isn’t it when they say that a soldier , whoever and whichever country they are fighting for – once they return they are not the same and its safe to say they leave a part of their soul in their enemies terrority. We need to respect our soldiers more, thank our armies for sacrificing their sanity, families and lives for us.